Meet the Press used to be the gold-standard for political debate. NOT ANYMORE.

Americans deserve an open debate on climate change and how to address it.

That's not what we got from Chuck Todd and Meet the Press on their December 30th special.

They devoted an entire show to promoting the views of climate

change alarmists. He says “the science is settled even if political opinion is not.” Todd expressly banned dissenting views, which are rooted in real-world scientific data.

That is not how science or scientists work. In the words of Charles Krauthammer, “There is nothing more anti-scientific than the very idea that science is settled, static, impervious to challenge.”

Contrary to Chuck Todd and the alarmists, there is a real debate among scientists, if not television journalists, about the extent of warming and its effects. Although the computer models predict rapid warming, the actual temperature data show only a modest rate of warming.

Real-world data demonstrate that the policies supported by climate alarmists are unwarranted. Huge tax hikes and energy rationing will cripple our economy, especially hurting those who can least afford it.

Millions of Americans agree that global warming is not a crisis that requires turning the economy and our lives upside down — but you’d never know that from watching Chuck Todd and Meet the Press. 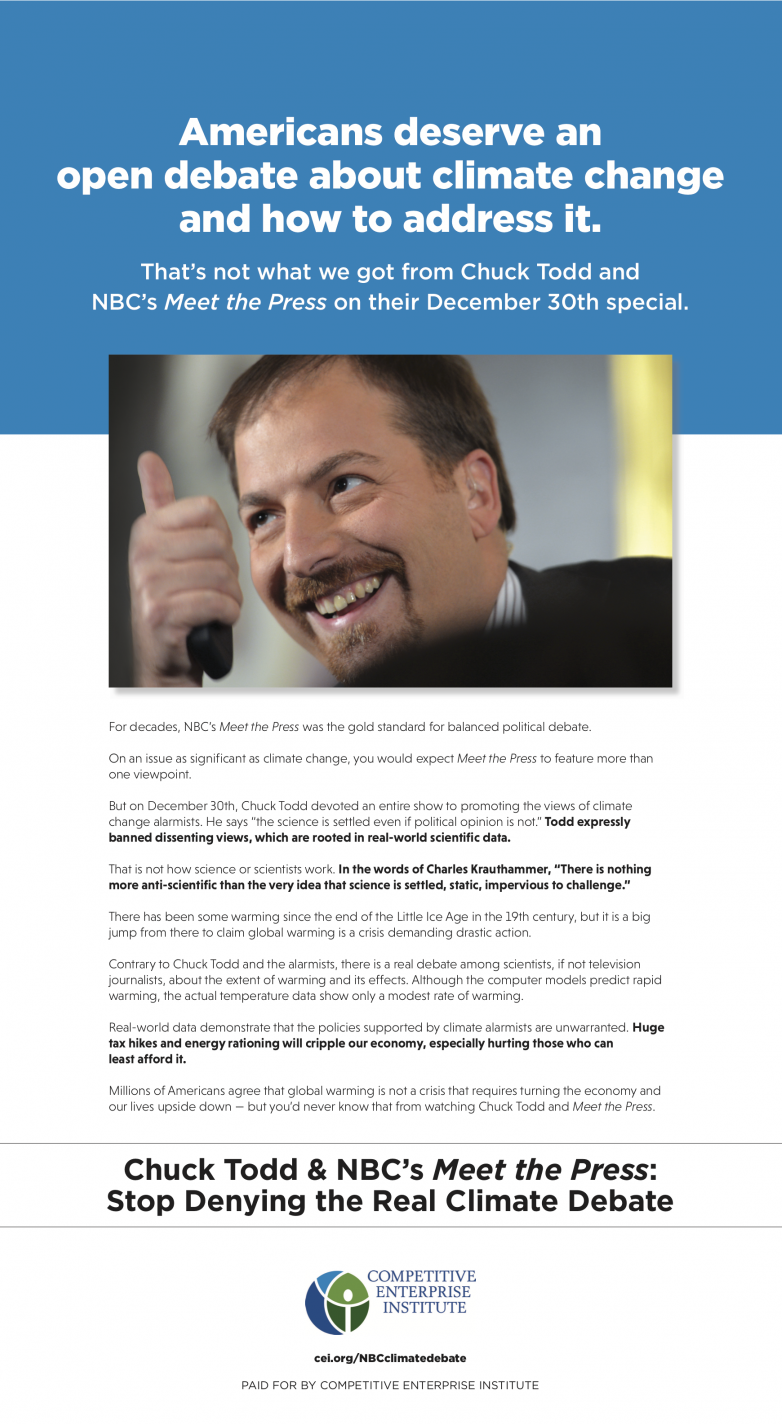 Although the computer models predict rapid warming, the actual temperature data show only a modest rate of warming.

“Comparing modeled to observed trends over the past 60 years using a persistence-robust variance estimator shows that all models warm more rapidly than observations and in the majority of individual cases the discrepancy is statistically significant. We argue that this provides informative evidence against the major hypothesis in most current climate models.”

“The Canadian Centre for Climate Modeling and Analysis located at the University of Victoria in British Columbia submitted five runs of its climate model CanESM2 for use in the fifth assessment report of the International Panel on Climate Change (IPCC). The climate model produces one of the most extreme warming projections of all the 30 models evaluated by the IPCC. … The model badly fails to match the surface and atmosphere temperature observations …. “ (Italics added.)

There is a real debate among scientists about the extent of warming and its effects.

P.J. Michaels, When Will Climate Scientists Say They Were Wrong?, May 29, 2015, https://www.cato.org/publications/commentary/when-will-climate-scientists-say-they-were-wrong

“Day after day, year after year, the hole that climate scientists have buried themselves in gets deeper and deeper. The longer that they wait to admit their overheated forecasts were wrong, the more they are going to harm all of science.”

R.S. Lindzen, Global Warming and the Irrelevance of Science, from an August 20, 2015 lecture to the 48th Session of the Erice International Seminars on Planetary Emergencies, https://www.thegwpf.org/content/uploads/2016/04/Lindzen.pdf

“Currently, there really is quite a lot of basic agreement within the climate science world:

• levels of CO2 in the atmosphere have been increasing.

"None of this is controversial and none of this actually implies alarm. ….

There are numerous examples of the issuance of unalarming claims,

regardless of their validity or lack thereof, that are interpreted as demanding imme-

diate action. Perhaps the most striking example involves the iconic statement of the

IPCC: Most of the warming over the past 50 years is due to man. Is this statement

actually alarming? First, we are speaking of small changes. 0.25C would be about

51% of the recent warming. Given the uncertainties in both the data and its analysis,

this is barely distinguishable from zero. Evidence of this uncertainty is shown by the common adjustments of this magnitude that are made to the record." (Italics added.)

Roger Pielke, Jr. The Rightful Place of Science: Disasters & Climate Change (Consortium for Science of Arizona State University, 2018) "So far, at least, the data don't support claims that the rising costs of climate disasters are due in any part to a human influence on climate.

"In fact, based on the current expectations of the climate science community--specifically that humans are impacting the climate and that these impacts will become more significant in the future as predicted by the IPCC--there presently is very little basis for expecting that changes in climate will lead to a discernible increase in the costs, severity, or frequency of disasters any time soon. It will likely be many decades before such a signal can be detected in disaster loses based on current scientific understandings."

Huge tax hikes and energy rationing will cripple our economy, especially hurting those who can least afford it.

Richard Toll, Private Benefit of Carbon and Its Social Cost, 2017, Working Paper Series 0717, Department of Economics, University of Sussex Business School. https://ideas.repec.org/p/sus/susewp/0717.html “The private benefit of carbon is much higher than the social cost of carbon.”

Steven D. Eule, “The 1.5°C Solution,” Global Energy Institute of the U.S. Chamber of Commerce, https://www.globalenergyinstitute.org/analysis-15%C2%B0c-solution. Conventional wisdom holds that meeting the Paris Agreement’s 1.5°C goal would require a roughly 83% reduction in global emissions below 2010 levels by 2050. Reaching the “83-by-50” goal would “require cutting or avoiding emissions roughly equal to total net emissions from the United States in 2010 every three years for the next 35 years.” Even if developed country emissions decline to zero, developing country emissions would have to plunge “to 72% below their 2010 level by 2050.” Developing countries, where more than a billion people still have no access to electricity, “will never accept such limits on their growth. That is, unless developed countries are willing to foot the bill, which would run into the multiple trillions of dollars.”